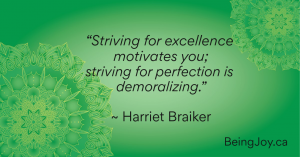 I was watching one of those baking competitions on TV the other night, and while being interviewed during the episode, one of the contestants boasted about being a perfectionist.  She claimed that because she had such high standards and that nothing would do unless it was perfect, that made her a great baker.

As it turned out, she got so flustered when things didn’t go her way that she barely finished and ended up presenting a dessert that was not something she could be proud of. She was eliminated from the competition.

You see, perfection is never attainable.  There will always be something you can pick apart if you really want to.  And as the quote above so beautiful illustrates, this poor contestant became so demoralized, that she was not even able to do her best, let alone get anywhere close to the standard she had set for herself. 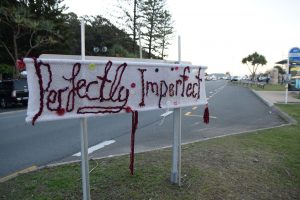 Now, I’m not suggesting that you set the bar low, or do just the bare minimum.  Strive to do and be your best, or at least better than you were yesterday.

So how do you get over the habit of “perfectionism”?  I think it’s about contemplating where that tendency came from.

For most people who are self-proclaimed perfectionists, it’s because they were conditioned early on to believe that unless they did things perfectly, they were not worthy of reward.  Meaning they felt unworthy of love.  It often starts when they are very young and then school reinforced it, then through work and relationship. It’s hard to get away from it since society rewards achievement above pretty much everything else.

And when you’re under the illusion that you can attain perfection, your need to control everything kicks into high gear.  It’s never fun for you or those closest to you.

But once you acknowledge that perfectionism is just an illusion of the Ego, which is really based on fear, you’ll start to loosen your grip on having to control things.  You’ll remember that you’re good enough the way you are which will ironically empower you to do your best.  Then striving for excellence instead of perfection will be your new operating system.  And way more life-affirming.

So, the next time you feel that your perfection switch has been activated, here’s a simple tip you could try from my book Being Joy™  that might help you be satisfied with where you are.

DON’T SWEAT THE SMALL STUFF! Make a point of catching yourself when you feel critical of yourself or others today. Instead, breathe and relax into the contentment of accepting yourself and others just the way you are. Be mindful of the temptation to fuss or tidy things – just for one day. And repeat the mantra, “Good enough is good enough.”

You can do it.

P.S.   What do you do to empower yourself to strive for excellence and not perfection?  Drop a comment below.  It would be great to hear your thoughts.

If you enjoyed this post, you may also these:
Do you know the fastest way to joy?
Be kind to yourself on Canada’s birthday
Stop chasing perfection
You can give the gift of presence

Recent Posts
Archives
40 DAYS TO A NEW JOYFUL HABIT AND A NEW YOU.
Order My Book
Copyright Gloria Stewart 2021 - All Rights Reserved
Back To Top
×
Share this ArticleLike this article? Email it to a friend!
Email sent!