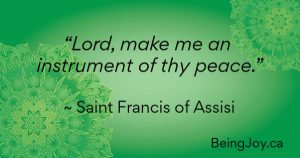 Over the centuries, humanity has been blessed with women and men whose life work was to bring healing to the heart and peace to the world. Mother Teresa, the Dalai Lama, Mahatma Gandhi, and Jesus Christ are the ones who tend to be most top of mind.

And I believe we have many more peace champions who live among us today.

One that I want to talk about today is Saint Francis of Assisi, or Giovanni di Pietro di Bernardone as he was born as in 1182.

As the son of a wealthy merchant, he was being groomed for a life in business. But as a teen, he became restless and soon became an activist fighting against the feudal nobility of the time.  This resulted in his imprisonment for one year.  After serving his sentence, he became rudderless and began a carefree life of parties and frivolity.

But soon he began to feel that familiar tug at his heart to follow his purpose. In 1203 he prayed for guidance.  It is said that it was through prayer that he received the message from God that his purpose was to be of service to the poor. In 1205 he made vows of poverty and later founded the “Order of Beggars Brothers of Assisi”.

Saint Francis was a real visionary for his day.  Because of his compassionate views on nature and humanity, he was recognized as one of the first forces that led to the philosophy of the Renaissance.  A true peaceful champion of his time.

You may already be familiar with the beloved Peace Prayer of Saint Francis, but in case you’re not, and in celebration of this month’s joy theme of peace, I want to share the first part of the prayer with you.

I’ve always loved this prayer and find it extremely helpful for elevating my joy vibration whenever I begin to feel trapped by the shadow side of life.  For me, peace is one of the truest gateways to joy. I hope you enjoyed it as well.

I’d love to hear your thoughts in the comments below. Who is your peace champion?

Love from your Joy Mama

If you liked this blog post, you may also enjoy this read to help you be peaceful:
Is lack of alignment one of your barriers to joy?
Who is your peace champion?
Do you have patience for a puzzle?

Recent Posts
Archives
40 DAYS TO A NEW JOYFUL HABIT AND A NEW YOU.
Order My Book
Copyright Gloria Stewart 2021 - All Rights Reserved
Back To Top
Share this ArticleLike this article? Email it to a friend!
Email sent!